All regions in Switzerland are considerably warmer than they used to be. The near-surface air temperature has risen over the last 150 years by about 2 °C – a considerably greater increase than the worldwide average. Nine out of the ten warmest years since records began have been in the 21st century. Heavy precipitation events have also become more intense and more frequent.

In Switzerland, there has been reliable long-term measurement of the climate since 1864. The data show clear evidence of climate change. For instance, the near-surface air temperature in Switzerland has increased over the last 150 years by about 2 °C.* This warming is considerably greater than the global average (0.9 °C). Since the 1980s, our climate has been experiencing its fastest recorded warming.

As a result of these temperature increases, we now have more frequent and warmer periods of hot weather than before. Moreover, the volume of the Alpine glaciers has shrunk by about 60 percent since the middle of the 19th century. Since 1970, the number of annual days of snowfall at 2,000 metres above sea level has diminished by 20 percent, and below 800 metres above sea level, it only snows half as often as it did then. The vegetation period is two to four weeks longer than in the 1960s.

Increases in heavy precipitation events can also be seen from the data series to date, and such events have become more intense and more frequent than they were at the beginning of the 20th century. Amounts of precipitation have also risen in wintertime.

The records do not give any clear indications of longterm trends in terms of the total precipitation in summer, nor of dry periods, low stratus or wind speeds. This may be attributable to the fact that these parameters are barely or not at all affected by climate change. It could also be the case that the influence of climate change has not yet become apparent for these parameters. The basis of observations is insufficient to determine changes in small-scale phenomena such as thunderstorms, tornadoes and hail.

Although temperatures in Switzerland vary from year to year, the warming since the start of record-keeping is clearly identifiable. The trend line over the measurement period indicates a 2-degree warming from 1864 to 2017. The average over the normal period from 1981 to 2010 is shown by the dotted line. 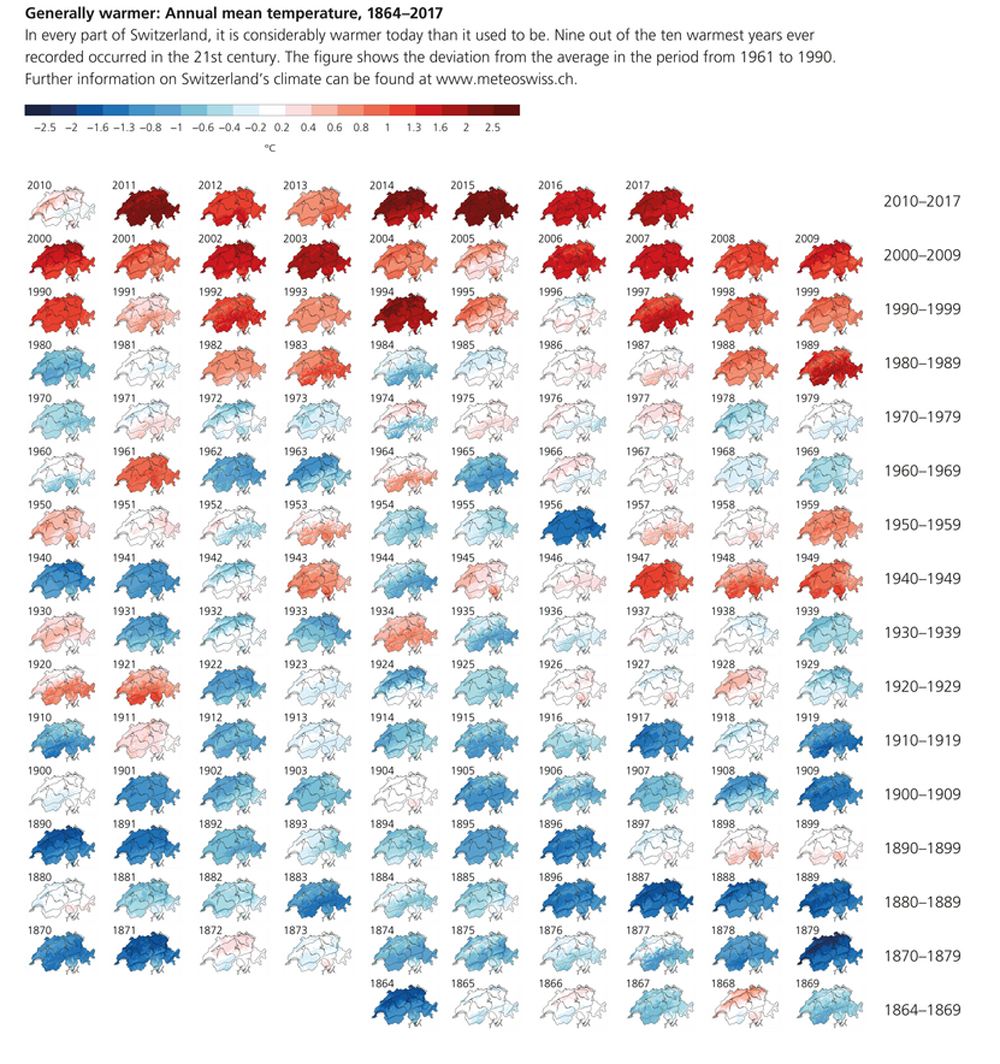 How will the trends continue in the future? Read all about the Climate Change Scenarios for Switzerland here.

MeteoSwiss provides detailed information on today’s climate and on climate change in Switzerland.

Here you find the averages for the current month and year (normal period 1981-2010) for temperature, precipitation, and various climate indicators and weather extremes as maps.

Here you find the annual and seasonal trends for temperature and precipitation at various measurement stations in the Swiss climate network and for different time spans.

Graphs over time since measurements began in 1864 or since 1961 for summer days, days with fresh snowfall and other climate indicators at various measurement stations in the Swiss climate network are available here.

Deepen your understanding of climate and climate research.

Learn all about today’s climate in Switzerland here.

Temperature and precipitation trends in Switzerland

Find out about the changes in temperature and precipitation in Switzerland from the time that measurements began, up to the present day.

Find here high-resolution monthly and annual grid maps for temperature, precipitation and hours of sunshine from 1981 up to the present day.