More intense heavy rainfall will lead to more localised flooding and surface runoff. There is also evidence to suggest that large-scale floods will become more common. In addition, warming will cause glaciers to melt and will destabilise the frozen subsoil in high-altitude areas.

A warmer atmosphere will contain more energy and be able to absorb more moisture, increasing the potential for heavy rain and thunderstorms. The heaviest single-day precipitation events will therefore be 20% more intense by the end of the century unless climate change mitigation is implemented. This means that a future summer thunderstorm may release considerably more rain than its equivalent today. Heavy precipitation events will also become more frequent.

As a result, localised flooding due to floods and surface runoff will increase. During surface runoff precipitation does not infiltrate into the soil but inundates open ground, causing damage to buildings, infrastructure and fields. Two thirds of all buildings in Switzerland are located in areas potentially at risk from surface runoff.

There is also evidence that floods due to prolonged precipitation may become more frequent and cause widespread flooding and damage. Despite a definite increase in localised heavy precipitation, the future development of rare large-scale flood events remains difficult to predict. 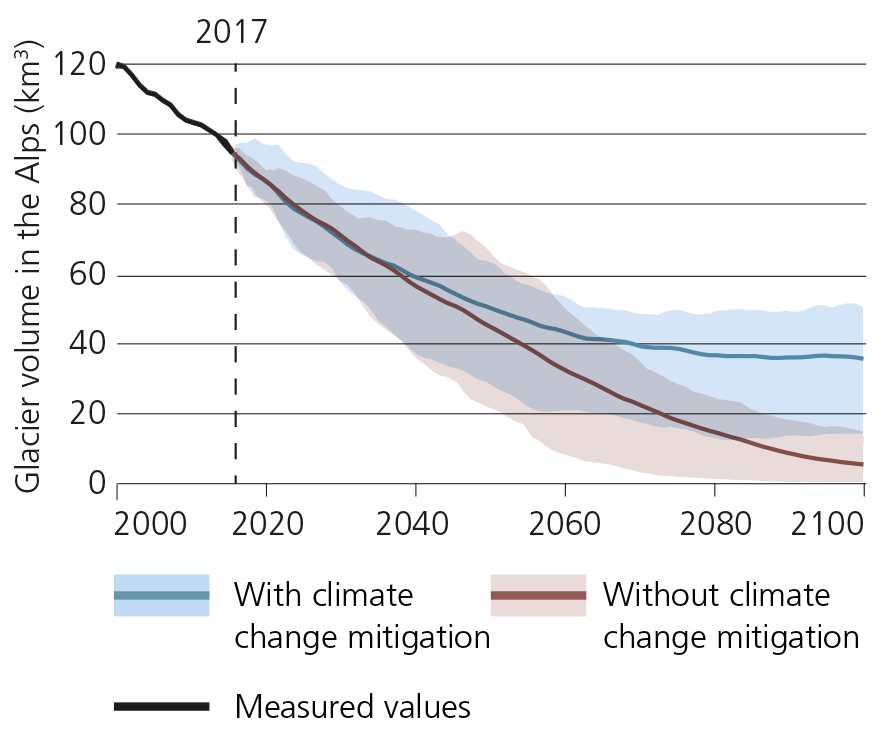 The graph shows how the volume of glaciers in the Alps will change in the future. The light areas indicate the range of the simulations.

As rising temperatures thaw the permanently frozen subsoil (permafrost) in the mountains and cause glaciers to shrink, slope stability in the mountains will diminish. Landslides, rockfalls and debris flows will become more common, while the volume of loose rock and debris will increase. During flood events, the loose material will be transported to lower areas, where it can cause damage.

As the population grows and the landscape is used more intensively, more and more assets and property will be at risk from natural hazards. To prevent damage, a natural hazard map and a surface runoff risk map are available. These show the areas at risk from adverse events.

Integrated risk management has proved an effective way of dealing with risks from natural hazards in Switzerland. This comprehensive approach will also allow those responsible to take systematic account of the changes brought about by climate change – for example when drawing up land use plans, building regulations or emergency response plans. 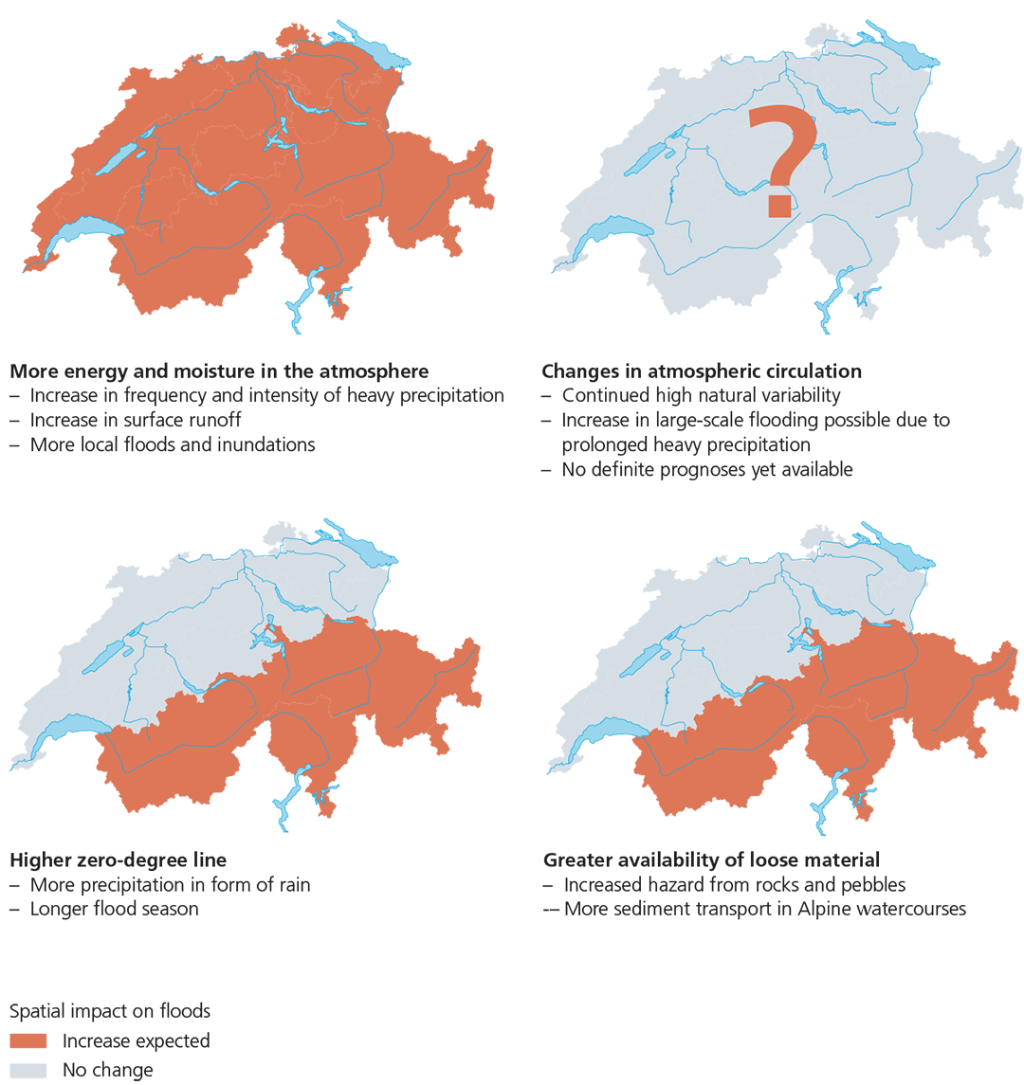 Possible range of changes 2070–2099 compared to 1981–2010. 30-year averages across Switzerland rounded to 5%. Uncertainty range of heavy precipitation is not considered, since it is strongly determined by natural fluctuations. 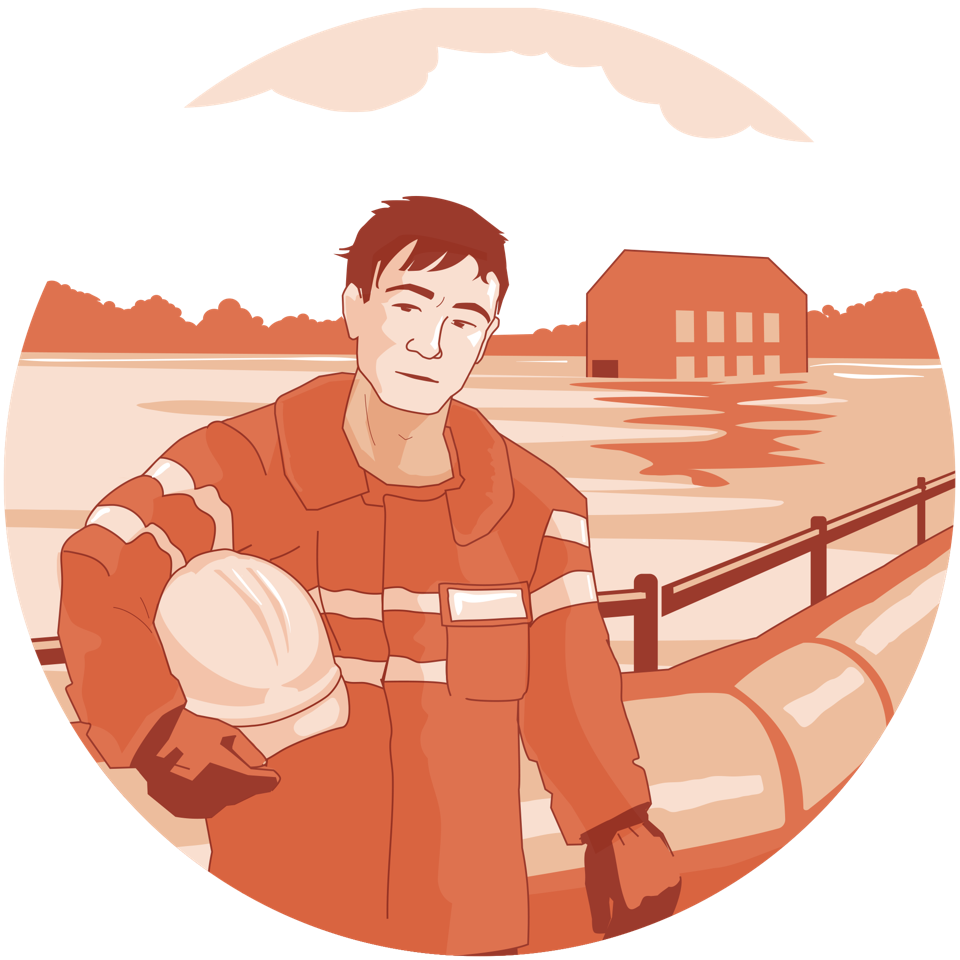 “We have to be prepared for an increase in damage caused by surface runoff from heavy rainfall. Many buildings in Switzerland are at risk. Anyone who owns a property should definitely check the surface runoff risk map to see whether the property is in an at-risk area. Even simple measures can prevent water from entering underground garages or basements, for example.”