The largest volumes of precipitation occur in the Bernese, Urn and Glarus Alps. Conversely, the inner Alpine valleys are some of the driest areas in Switzerland. Frost can occur at any time of the year in the high Alps.

In high valleys, where cold air pools often form, the temperatures are often much lower than the Swiss average of the corresponding altitude. In foehn valleus and those with strong solar insolation, the temperatures are above average. At higher altitudes, frost can occur all year round. However, summer days are recorded in lower altitudes as well.

The rainfall pattern of the Alps is very complex. The highest rainfall occurs in the Bernese, Uri and Glarus Alps. The smallest amounts are found in the inner Alpine valleys. Often there is a clear annual cycle with maxima in the summer. This is especially pronounced in the Engadin. In the Valais you can find typical patterns with large amounts of precipitation at the summits and small amounts in the nearby valleys. In winter, with the exception of low-lying valleys, there is almost always snow. Thunderstorm, lightning and hail activity is smaller than in the pre-Alps.

The solar insolation is comparatively high throughout the year, with the highest values occurring in the protected inner Alpine valleys of the Valais and the Engadin. The wind speeds reach the highest values of Switzerland in summit locations, but can also be very small at wind-protected locations. The small-scale climatic conditions are very variable, so that general rules often fail. Thus, the Valais, the Central Alps, the Eastern Alps and the Engadin differ considerably depending on the entity considered.

If global greenhouse gas emissions continue to rise unchecked, the most pronounced warming in Switzerland will be seen in the Alps, potentially around 2–4°C by the middle of this century. Winter precipitation is likely to increase, but because of the higher temperatures, it will fall more frequently as rain instead of snow. As a result, the number of days with fresh snowfall will decrease.

Get infornation about the current climate in the Jura major region. 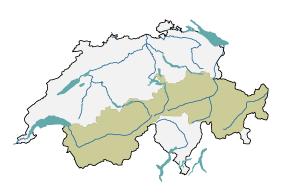