It is becoming warmer and drier. Climate change is altering the conditions in which forest trees grow and compete against each other. The new composition of tree species will result in  strong environmental and economic impacts.

Global climate change poses a threat to many of these vital forest functions and ecosystem services. In particular, the expected rise in temperature and more frequent and intensive periods of drought are likely to place greater strain on forests, prompting higher tree mortality rates and ultimately breakdowns of individual forest stands. But quite apart from the issue of mortality, heat and drought are both limiting ecosystem functions and services. The changing composition of tree species as a result of climate change, the increasingly frequent incidences of invasive species and temperature-controlled or drought-driven changes in microbially driven biogeochemical cycles will also have  major environmental and economic impacts.

When less water is available, tree growth suffers. This not only reduces timber production, but means that forests cannot store as much carbon dioxide. Moreover, drought and heat not only affect trees' carbon sequestration by photosynthesis, but also their nutrient uptake. This weakens trees' defences, making them more susceptible to biotic stressors (i.e. pests and diseases). 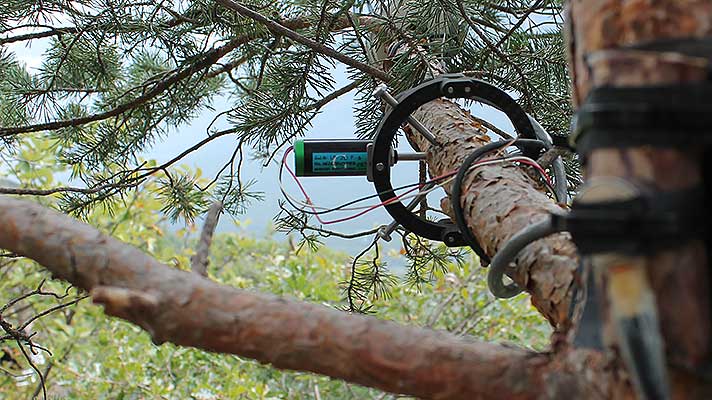 TreeNet is an international monitoring network that provides real-time information on how trees respond to drought.

Prolonged and/or intense heat and drought cause trees to weaken or die from lack of water (i.e. dehydration of plant tissue and an interrupted water supply) and/or from carbon deficiency (i.e. through limited photosynthesis, preventing primary metabolic processes). The weakened trees are then susceptible to pests and diseases, which ultimately often end up causing the trees to die. Smaller stands of trees provide fewer ecosystem services, particularly with regard to offering protection against natural hazards.

The distribution of tree species in forests depends, among other things, on climatic factors such as temperature and precipitation, as well as on topographic parameters like gradient and exposure. Altered climate parameters will affect the range of most species' distribution. Expected changes in temperature and precipitation attributable to man-made climate change will mean that in the long run species that are used to the cold or temperate climates, like Norway spruce – one of Europe's most important types of timber – will no longer be able to thrive across large swathes of their traditional range in Switzerland. Instead, they will give way to species such as oak, that are better adapted to heat and drought. 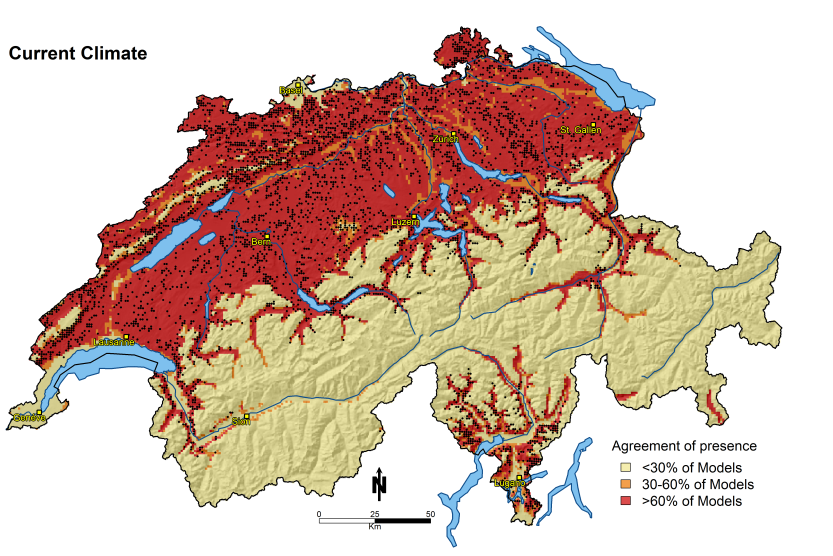 Range of the beech tree in Switzerland

Range of the beech tree in Switzerland today. Global warming will prompt beech trees, which are very common on the Swiss Plateau today, to retreat to higher elevations. (Source: Portree; Niklaus Zimmermann, WSL) 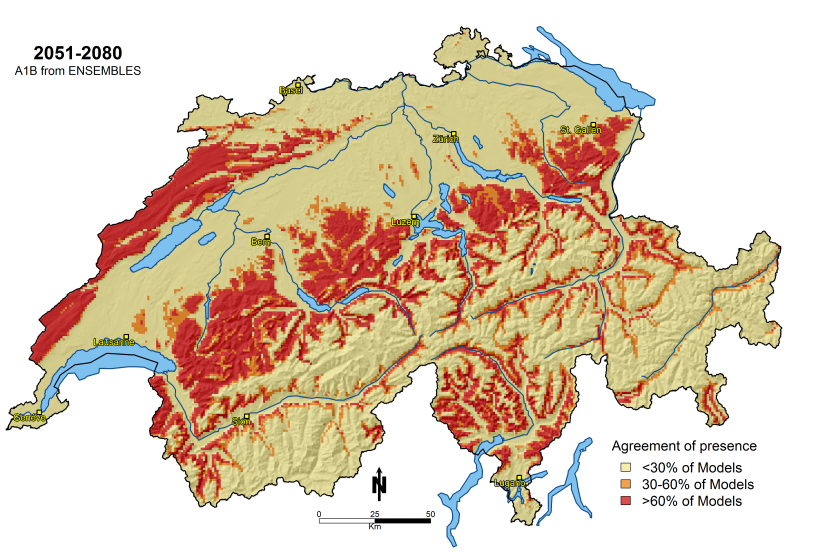 Range of the beech tree in Switzerland

Range of the beech tree in Switzerland projected by 2080. Global warming will prompt beech trees, which are very common on the Swiss Plateau today, to retreat to higher elevations. (Source: Portree; Niklaus Zimmermann, WSL) 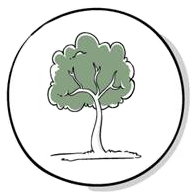 Climate change affects the forest functions, forest health, the distribution of tree species and the forest as carbon sink.