The average annual runoff only changes slightly due to climate change. But seasonal runoff distribution has already changed in recent decades. Runoff has decreased in summer and increased in winter. Climate change ensures this trend will continue.

Runoff in streams and rivers comes from precipitation, meltwater and groundwater. Only part of the precipitation runs off on the surface. The rest infiltrates the soil and groundwater or is stored as snow or glacier ice. Climate change will alter seasonal runoff fluctuations.

Although annual runoff in the Swiss watercourses vary widely from year to year, their long-term average has hardly changed since measurements began early in the 20th century.

However, runoff regimes have already changed significantly over the 1961–2015 observation period. Runoff increased in the winter months in most catchments, because the air temperature rose and more precipitation fell as rain rather than snow in winter. In contrast, a decrease in average runoff was generally observed in summer – except in highly glaciated catchments.

Discharge in the Rhine

Discharge in the Rhine 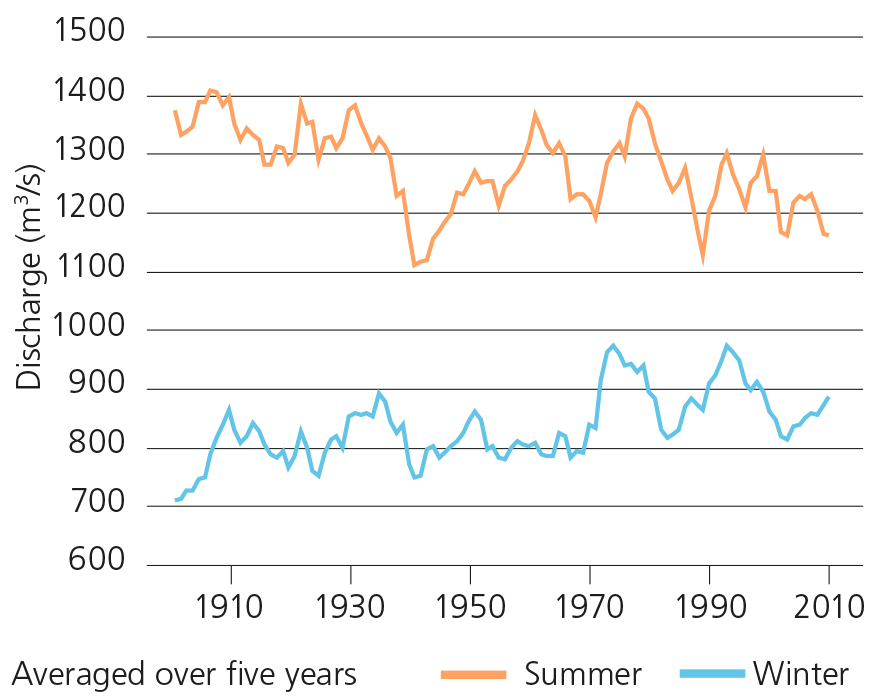 The figure shows the discharge, averaged over five years, at the Basel gauging station. The summer and winter discharge patterns have reversed.

The smallest changes in winter runoff occur in catchments both on the Swiss Plateau, where the snowpack already contributes little to it, and at very high elevations, where most of the precipitation will continue to fall as snow in future.

The scenarios show an average decrease in summer runoff of around 10% with and 40% without climate change mitigation by the end of the century. The factors responsible for this decline are lower summer precipitation, higher evaporation and the decrease in glacier and snow melt water.

Areas at all elevations and in all regions are affected by decreasing summer runoff. A significant drop can be expected on the Swiss Plateau and in the Jura and the Prealps, especially in late summer. A significant decrease in summer runoff is also expected in Ticino. Similarly, it will be strongly reduced in regions which are currently still glaciated.

Trend towards more extreme low flows in summer continues
The CH2018 climate scenarios indicate that average sum- mer precipitation amounts are decreasing and droughts are tending to last longer. A consequence of the higher temperatures is that evaporation also increases as long as there is enough water available in soil and vegetation. The hydrological low flow scenarios indicate a decrease in low flow discharge in summer and autumn on the Swiss Plateau and in the Jura and Southern Swit- zerland. Since the lowest flows of the year generally occur during that period, these changes are also apparent in the annual NM7Q and Q347. 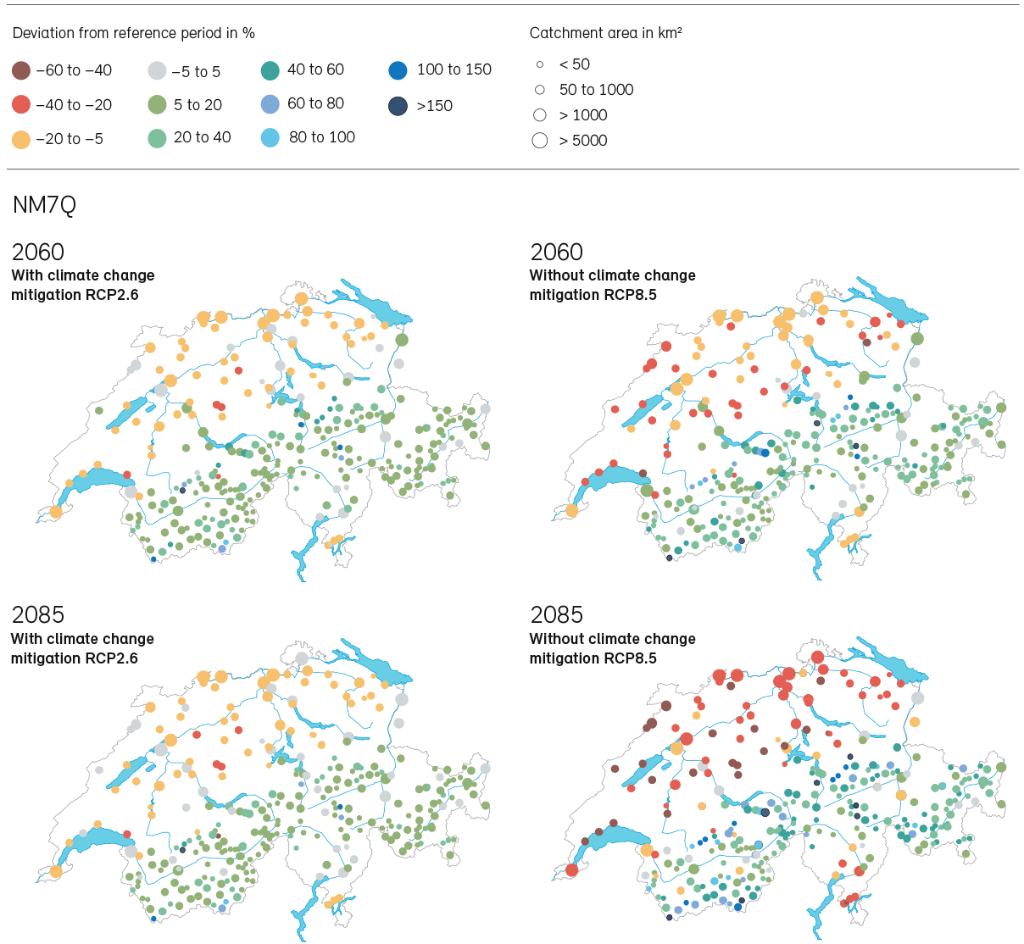 Low flow situations are generally characterised by the parameters Q347 and NM7Q. Q347 is the discharge of a watercourse which is at least reached or exceeded for 95% of the time, that is on 347 days in an average year (averaged over 10 years). The discharge Q347 is defined in the Waters Protection Act (Article 31 Section 1 WPA) as the minimum residual flow and plays a key role as low flow indicator. The second indicator is NM7Q, defined as the lowest arithmetic mean of seven consecutive daily values of the discharge in a period considered. NM7Q is a robust indicator with low susceptibilty to measurement error or short-term effects.

Shift in the low flow season in the Alps and Prealps

The hydrological scenarios paint a a somewhat more differentiated picture in the Alps and Prealps. The winter discharge during low flow increases in the near future at elevations of between 1500 and 2000 MASL due to the milder and wetter weather. However, without climate change mitigation the discharge during the summer decreases so much due to the reduction in melt water that in some regions the low flow season is shifting from winter to autumn or summer. In these regions low flow will then be caused by lack of precipitation rather than low temperatures.

Although all regions below 1500 MASL show a significant decrease in Q347 by the end of the century without climate change mitigation, the chang- es in regions between 1500 and 2000 MASL are small, with the Q347 being both slightly increased or decreased. All the scenarios for the very high elevations above 2000 MASL indicate an increase in low flows Q347, even for the distant future, and therefore less significant low flow situations in winter.

Development of Q347 over time

Development of Q347 over time 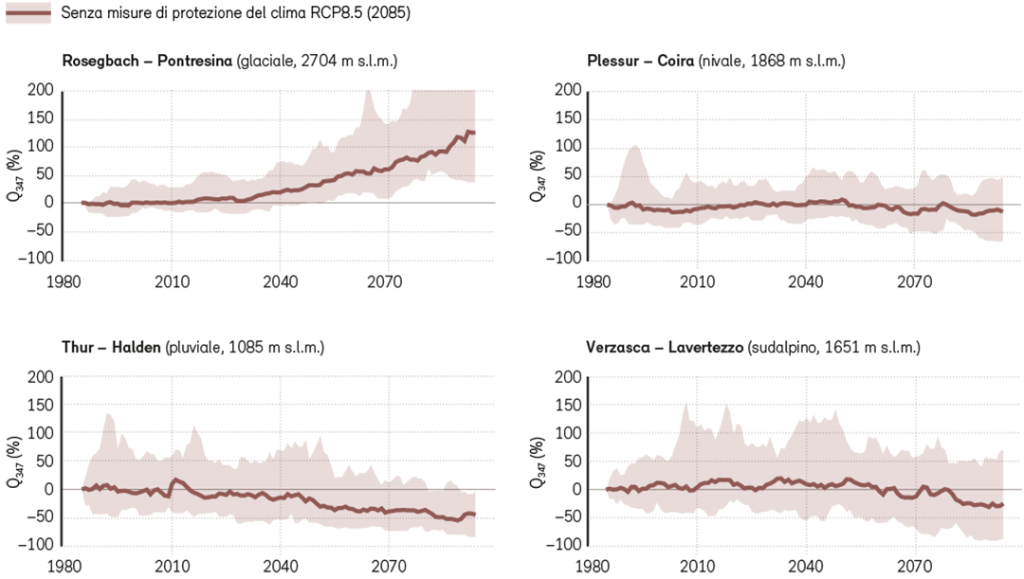 The percentage change in the low flow indicator Q347 (median and range of uncertainty) compared with the reference period (1981–2010) was analysed for moving ten-year periods from 2010 to 2099 for the scenario without climate change mitigation (RCP8.5). In the glacial Rosegbach region, the flow indicator Q347 increases markedly by the end of the century, but decreases in the Thur (pluvial) and Verzasca (southern alpine). The Q347 hardly changes in the Plessur.