Increasing air temperatures and the introduction of warm water from cooling and wastewater treatment systems have raised the temperature of surface water over recent decades. The average temperature of watercourses has already increased considerably. They have warmed very substantially in summer, with much less pronounced warming in winter. The average warming of watercourses between 1979 and 2018 was 0.33°C per decade. This represents around 90% of the rise in average air temperature in the same period. 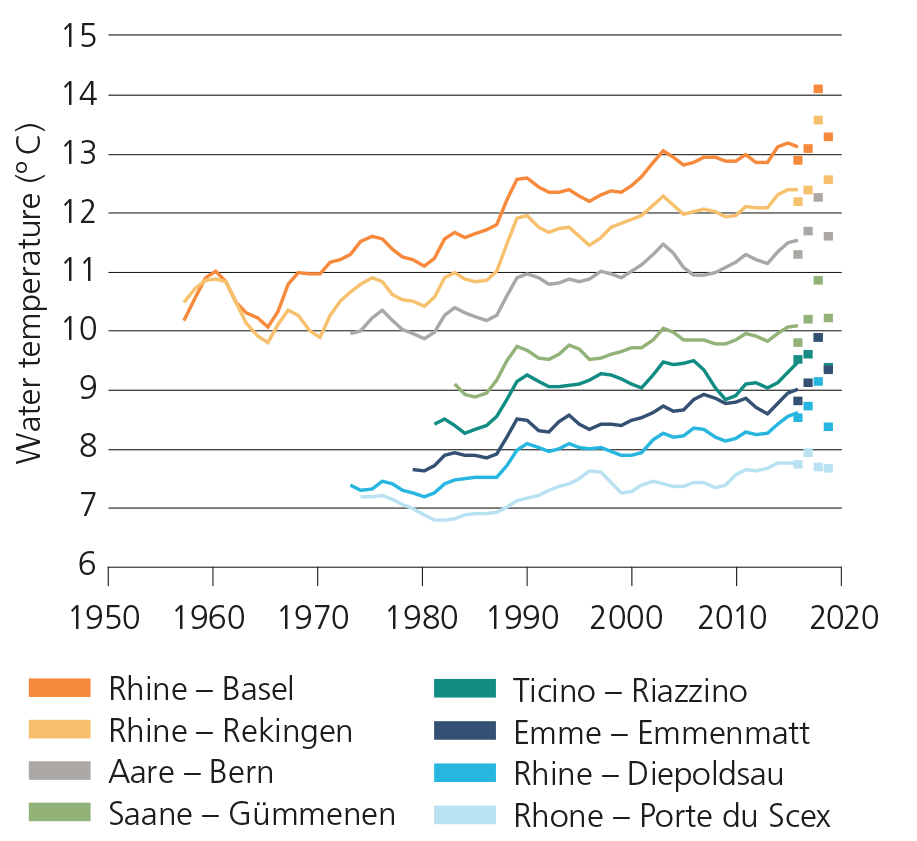 Using a number of examples, the graph shows that the mean annual water temperature in Swiss watercourses has risen significantly in recent decades. Moving averages (over seven years) are shown as lines and the last four annual means are shown as points.

The hydrological scenarios show that this rise is set to continue, especially in summer and in the alpine regions. By mid-century the models predict warming by 2°C on the Swiss Plateau and 1.6°C in alpine waters; by the end of the century these numbers rise to 3.2°C in all watercourses – unless effective climate change mitigation measures are taken. 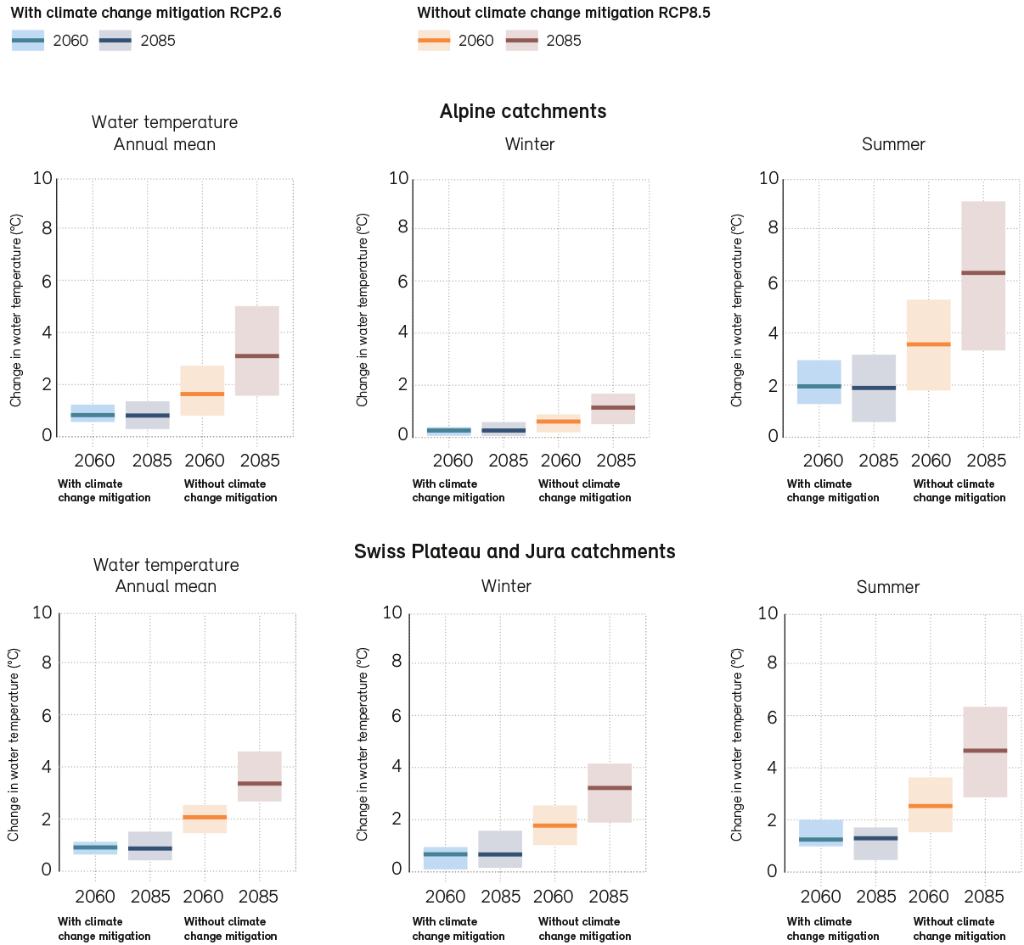 Average changes in water temperature (mean and range of uncertainty) for the full year and for winter and summer with (RCP2.6) and without climate change mitigation (RCP8.5) for mid-century (2055–2065) and for the end of the century (2080–2090) compared with the reference period (1990–2000). The alpine rivers Inn, Kander, Landwasser and Lonza and the Plateau and Jura rivers Birs, Broye, Eulach, Ergolz, Rietholzbach and Suze were studied. The water temperature will increase further in all the rivers.

The average warming of the surface water layers of Swiss lakes in recent decades is approximately 0.4°C per decade. Researchers have modelled the future development of temperature and stratification regimes for 30 lakes. A further increase in the temperature of the surface water layer (down to 1 m deep) is expected in all the lakes: for a scenario without climate change mitigation of between 3 and 4°C in most lakes towards the end of the century.

As a result of the altered water temperatures, the mixing regimes of the lakes are changing: The stable stratification conditions in summer are lasting longer, but winter stratification is occurring less often and the formation and duration of the lake ice is decreased.

The frequency and intensity of mixing in the waters is vital for the lake ecology, as it is the only means of establishing a balance of substance concentrations (nutrients, oxygen and pollutants) between deep and surface water. 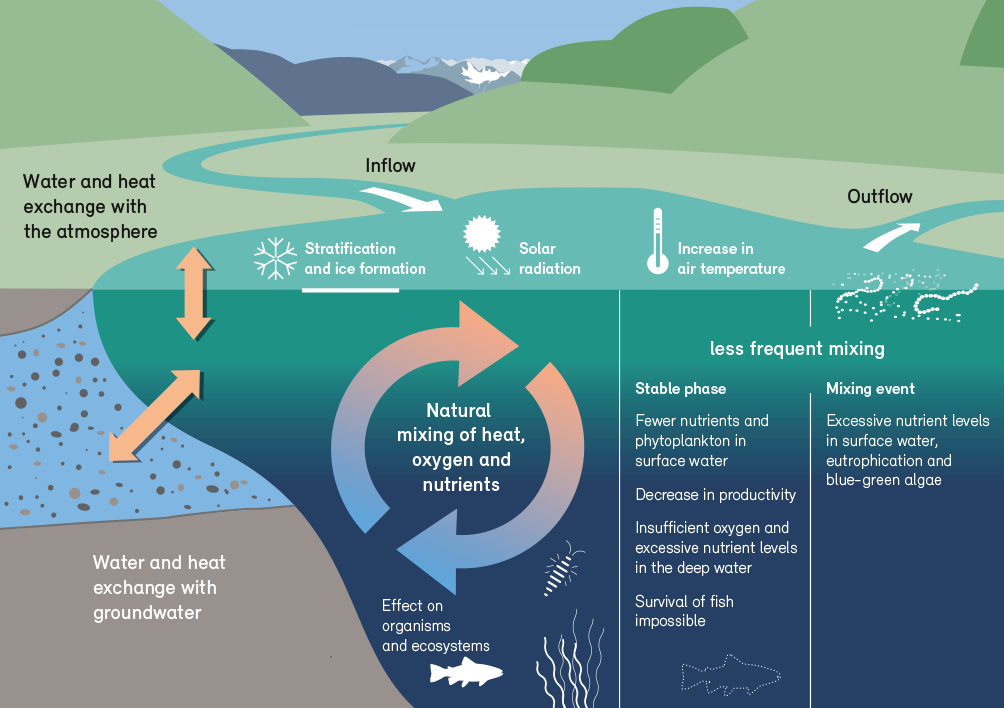 A very serious impact on the lake ecosystems is caused by changes in the mixing regime, i. e. if a lake mixes less frequently, less deeply or not at all.