As a result of climate change, the frequency and intensity of weather extremes are on the rise. An increase in heavy precipitation can already be seen in many regions today. This will affect the scope of damage. The frequency and scope of intervention needed by civil protection forces will also increase.

The challenge of climate change for civil protection has already been an issue for several years. However, the impacts and the ensuing measures have so far only been generally identified.

The study has two parts with clearly defined goals:

As this is a pilot study which is intended to serve as a basis for further analyses, the method used is clearly documented.

Around 75% of the deployments have taken place in areas potentially at risk from surface runoff. This stands in contrast to approximately 25% of deployments that could be affected by flooding from watercourses or lakes. These two hazard scenarios can also overlap. 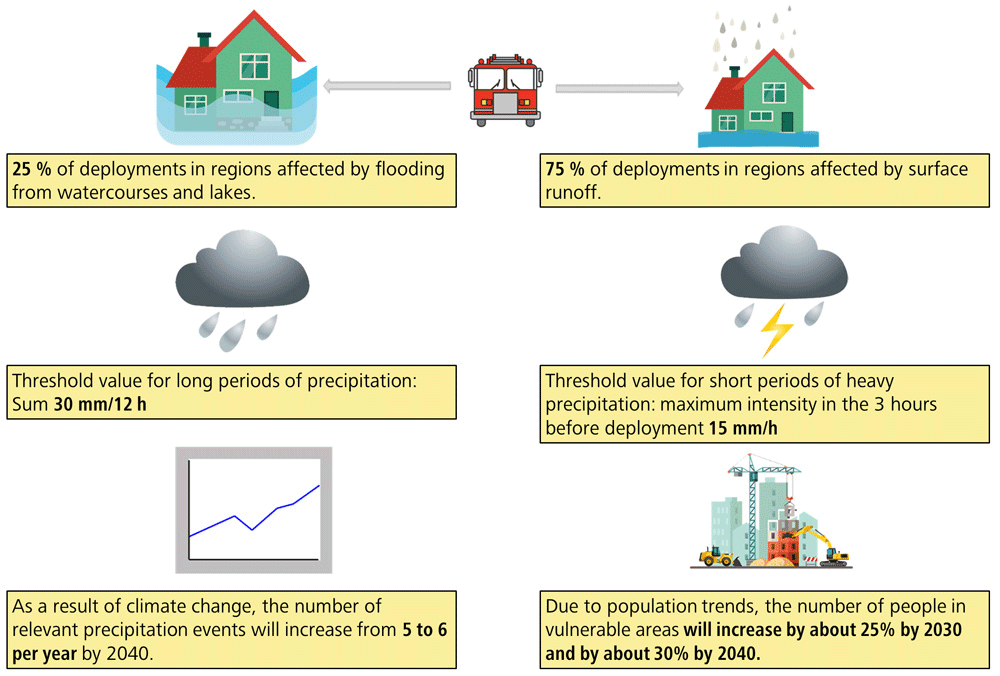 Results of the study with respect to hazard scenarios, threshold values and future developments.

The study shows that in the near future (approx. 20 years), the development of residential areas is a greater challenge for Zurich protection and rescue services than climate change. In the second half of the century, however, the impacts of climate change will clearly gain in importance.

The study was conducted by the geoscientific office geo7 AG under the direction of the Federal Office for Civil Protection (FOCP). The study was only possible thanks to the high-quality data provided by the Zurich protection and rescue services, MeteoSchweiz and the cantonal authorities of the canton of Zurich.

The most important partners: