Without concerted efforts to mitigate climate change, by the middle of the century, an average summer could have up to 25% less precipitation. In terms of winter precipitation, an increase of up to 20% is possible. However, with a rapid and comprehensive reduction in global greenhouse gas emissions, the changes in precipitation could be moderated.

The further changes to the climate depend on the global emissions of greenhouse gases. The values listed below show how precipitation is projected to change with climate change mitigation (emission scenario RCP2.6) and without mitigation (RCP8.5) in the near future (2035), by the middle of the century (2060), and towards the end of the century (2085).

What do RCP2.6 and RCP8.5 mean? You can find an explanation of the emission scenarios here.

What does "the middle of the century" mean? You can find an explanation of the CH2018 time periods here.

In the near future, the possible effects of climate change mitigation are not substantial, but these effects will increase progressively towards the end of the century. If greenhouse gas emissions continue to rise unabated (RCP8.5), summer precipitation towards the end of the century could be up to 39% lower than today. A rapid and global reduction in greenhouse gas emissions (RCP2.6) could effectively mitigate this decrease (-16% to +9%). Winter precipitation will continue to increase (+2% to +24%) without climate change mitigation (RCP8.5). Here, too, the upward trend could be mitigated. Precipitation is subject to large natural fluctuations, which is why the effects of climate change are less noticeable than with the temperature trend. 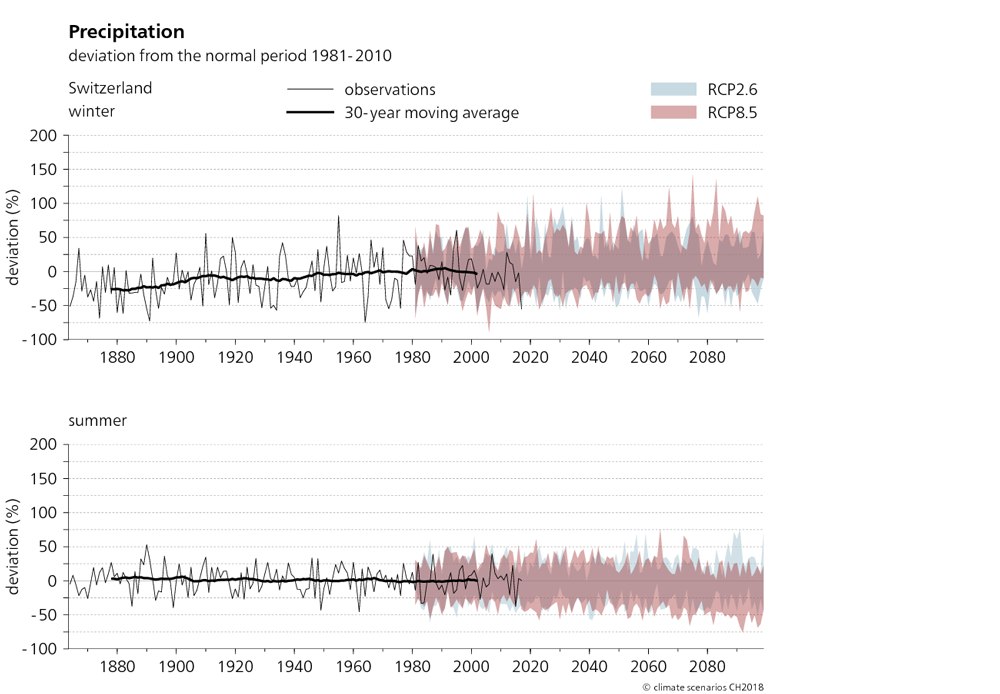 Deviation from average precipitation in comparison to the normal period for winter (December to February) and summer (June to August). Actual observations and climate simulations for the RCP8.5 and RCP2.6 emission scenarios are shown. The coloured areas indicate the ranges of the simulations created with different climate models, including chance fluctuations from year to year as well as system-based model uncertainties.

Change in average precipitation compared to current levels (normal period 1981–2010) for winter (December to February) and summer (June to August) based on climate simulations for the emission scenarios RCP8.5 and RCP2.6. The changes are average values over 30-year periods around the years 2035 (near future), 2060 (middle of the century), and 2085 (end of the century). The horizontal lines represent the median value across the simulations with different climate models. The coloured bars show the range of all simulations and include natural fluctuations as well as system-based uncertainties.

The relative changes in seasonal precipitation up until the middle of this century (2060) are greatest in southern Ticino and in central Switzerland. In summer, we can expect a country-wide reduction in average precipitation. More details on regional variations in climate change in Switzerland can be found here.

The graph below shows the average seasonal precipitation for winter and summer and the expected relative change in these precipitation levels as a percentage for the period around 2060. Click on RCP2.6 or RCP8.5 to switch between the different Scenarios.