The influence of the Mediterranean on the southern side of the Alps ensures mild winters and warm, humid summers. The mild northerly foehn also contributes to the mild winter temperatures. Most rainfall occurs in spring and autumn.

The influence of mild Mediterranean air masses leads to temperatures that are several degrees Celsius higher than for the rest of Switzerland. This is shown, e.g. in the large number of summer days. Frost, on the other hand, rarely occurs, especially in the vicinity of the low-lying lakes.

Southern Switzerland is one of the wettest areas in the country. The monthly precipitation statistics show two maxima: one in spring (May), the other in autumn (September, October). At the same time, however, the number of rainy days is small. This means that the individual precipitation events are often strong.

150 to 400 mm of precipitation per day can fall. In lowlands there is rarely any snow on average. However, there can be large amounts of fresh snow in the south as well, especially along the southern main Alpine ridge. The primary source of humidity throughout the year is the Mediterranean. In summer, local thunderstorms also play a central role. The lightning and hail activity is the largest in Switzerland.

The solar insolation is very high throughout the year, which is why Ticino is often referred to as the sunny balcony of Switzerland. Mist or high fog is rare. The wind speeds are basically small. Exceptions are exposed summits and north foehn phases. During north foehn conditions, the highest temperatures are recorded, especially in the winter months.

Climate Change Scenarios CH2018 - South side of the Alps

The influence of the Mediterranean results in temperatures that are generally higher at a certain altitude than in the rest of Switzerland. Consequently, summer days are a frequent occurrence. Hot days are also typical in low-lying areas in summer. Precipitation levels are high in southern Switzerland. Around 150 mm to 400 mm of precipitation can fall in a day. Snow is a rare occurrence in low-lying areas. Sunshine levels are very high all year round.

Get Information about the current climate in the Jura major region. 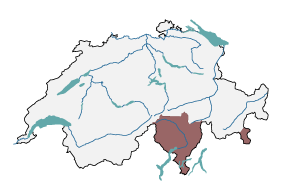