The climate of the Swiss Plateau is characterised by a large number of frost days in winter and several dozen summer days in summer. Depending on the region, between 800 and 1,400 millimetres of precipitation falls in an average year, predominantly as rain.

While the temperatures in the western Plateau are slightly higher than for comparable altitudes in the Swiss mean, they tend to be lower in the eastern Plateau. Frost often occurs in winter. There are already under current climate a few dozen summer days in the summer months.

The annual precipitation amounts to between 800 mm at the southern foot of the Jura mountains, 1200 mm in the higher parts of the Plateau and 1400 mm along the pre-Alpine region. While there is hardly any annual rainfall in the west, there is a pronounced summer maximum or minimum winter in the eastern Plateau. In winter there is snow for only a few weeks, with the number of days with fresh snow increasing slightly from west to east.

In the winter months, there are often over several days or weeks of high fog with an upper limit often above the highest elevations of the Plateau. In no other region, the solar insolation in winter and annual average is as small as in the Plateau. The winds, which blow mostly from western directions or from the northeast, are rather weak, especially in valleys.

Particularly in the foothills there are thunderstorms during the summer months, sometimes accompanied by hail. Especially in spring and autumn, the southern foehn partly reaches into the southern Plateau and gives this region above-average temperatures for the duration of the foehn phase compared to the rest of the Plateau.

If global greenhouse gas emissions continue to increase significantly, we can expect temperatures on the Swiss Plateau to rise by a further 2–3°C by the middle of the 21st century. This will mean a marked increase in the number of summer days, as well as in the number of tropical nights. Frost days will become less common. We can also expect winter precipitation to increase, and for it to fall more often as rain than snow because of rising temperatures. In contrast, the summer months will become drier.

Get information about the current climate in the Jura major region. 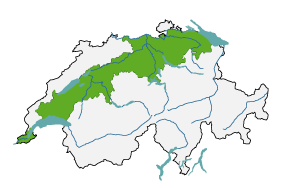