In the upper valleys of the Swiss Jura, significant cold-air pools can form. Typically, there are at least a few summer days every summer up to the higher altitudes. The Jura acts as a barrier at which rain falls from fronts coming in from the west.

In General, temperatures in the Jura major region are similar or slightly smaller than the temperatures in the Swiss average at comparable altitudes. Die high valleys in the inner part of the Jura are significantly colder than the Swiss average, particularly in winter. In this time of the year, frost occurs frequently. In summer, already in current climate several summer days are registered per year, even up to the higher locations of the region.

Given that the Jura is the first larger mountain ridge to work as a barrier for the weather systems east of the Atlantic ocean, the precipitation amounts are comparably large (in the higher zones, between 100 and 170 mm per month are measured). In the western part of the Jura, there is hardly an annual cycle. In addition, with more than 10 occurrences per month, the number of wet days is relatively large. In winter, snow is often found at higher altitudes. In the summer half year, thunderstorm frequently occur with high intensity and often combined with hail. In some very rare cases, even tornadoes can be observed.

In inner part of the Jura is often protected from the high fog appearing in winter in the Swiss Plateau. Solar insolation is substantially larger than in the Plateau, but smaller than in the Alps or south of the Alps. The average wind speeds belong to the highest in Switzerland, together with those measured in the Alpine region.

Without concerted efforts to mitigate climate change, temperatures in the Jura region could increase by another 2–3°C by the middle of the 21st century. As a result, the number of days with fresh snowfall will decrease, and frost days will become less common. Winter precipitation is likely to increase by 5–28%, and the summer months will become drier.

Get information about the current climate in the major region of the Swiss Plateau.

Current climate of the pre-Alps 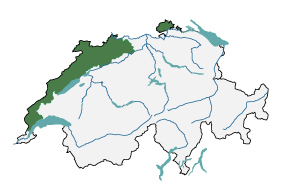