The climate of the pre-Alps is characterised by its abundance of precipitation. In summer, storms are a frequent occurrence, and in winter, snowfall is common even in the lower-lying areas. There is the odd summer day, even up to altitudes of 1,500 m a.s.l.

In climatological terms, winter temperatures tend to be higher (less fog), but rather lower in summer (increased cloud cover due to convection) than for comparable altitudes of the Swiss average. In winter, there is very frequent frost in middle and high altitudes, summer days are registered today up to altitudes of about 1500 m asl.

The annual precipitation amounts are very high from west to east (usually 1500 to 2500 mm per year). There is a clear maximum in the summer, which increases towards the east. June records an average of up to 18 rainy days during the norm period from 1981 to 2010. Typical for the pre-Alps is the very high thunderstorm activity in summer, sometimes accompanied by hail. In winter there is often snow down to lower altitudes.

The solar insolation is as low in the summer months as nowhere else in Switzerland. The reason is the increased cloud cover caused by convection and thunderstorms in summer. At exposed locations strong winds can occur in the pre-Alps. For example, strong gusts are not unusual in front passages, during foehn events or thunderstorms.

But even in the valleys wind speeds, e.g. during foehn events, reach very high values. Pre-alpine valleys are often affected by foehn, especially in spring and autumn. During foehn phases, the temperatures in the foehn valleys can easily be 10 to 15°C above the values of the neighboring Plateau.

If greenhouse gases continue to increase unchecked, precipitation in the foothills of the Alps is likely to increase in winter and decrease in summer. Due to the higher temperatures, however, winter precipitation is increasingly falling as rain instead of snow. The number of days with fresh snow is declining significantly, especially at medium and high altitudes. The rise in temperature results in an increasing number of summer days and tropical nights at low and medium altitudes.

Get information about the current climate in the Jura major Region. 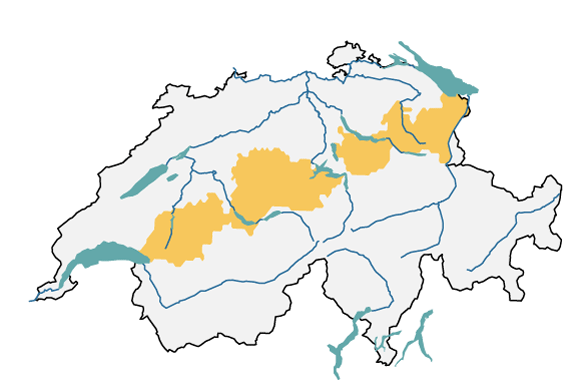