Water is among the most vital resources for life and the economy. We need it as drinking water, for irrigation, for energy production and in industry. Water availabi­lity and the water demand for various uses will change.

Climate change will result in longer dry periods, especially in summer and autumn. Drinking water suppliers must therefore be prepared for the output of some pump wells and springs to be reduced at this time of year, bearing in mind also that pollutant concentrations in water are liable to increase at these times due to lower dilution.

One important adaptation measure will be for every supply system to draw its water from at least two independent areas of origin, such as a lake and a groundwater body, and to be connected to neighbouring supplies. Such precautions will prevent Switzerland from facing drinking water shortages in the future. 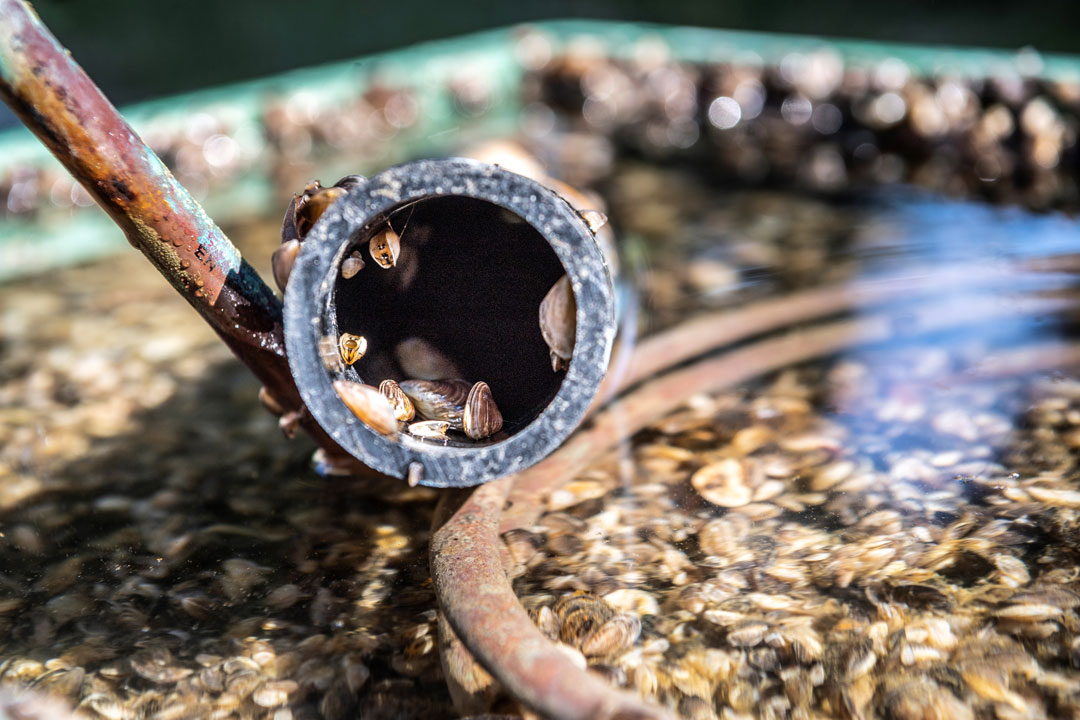 Toxic blue-green algae and the invasive quagga mussel in lakes can be a problem for drinking water supplies from lake water and can lead to higher costs for water treatment and maintenance of the infrastructure. Quagga mussels are up to 40 mm in size and cling fast everywhere. 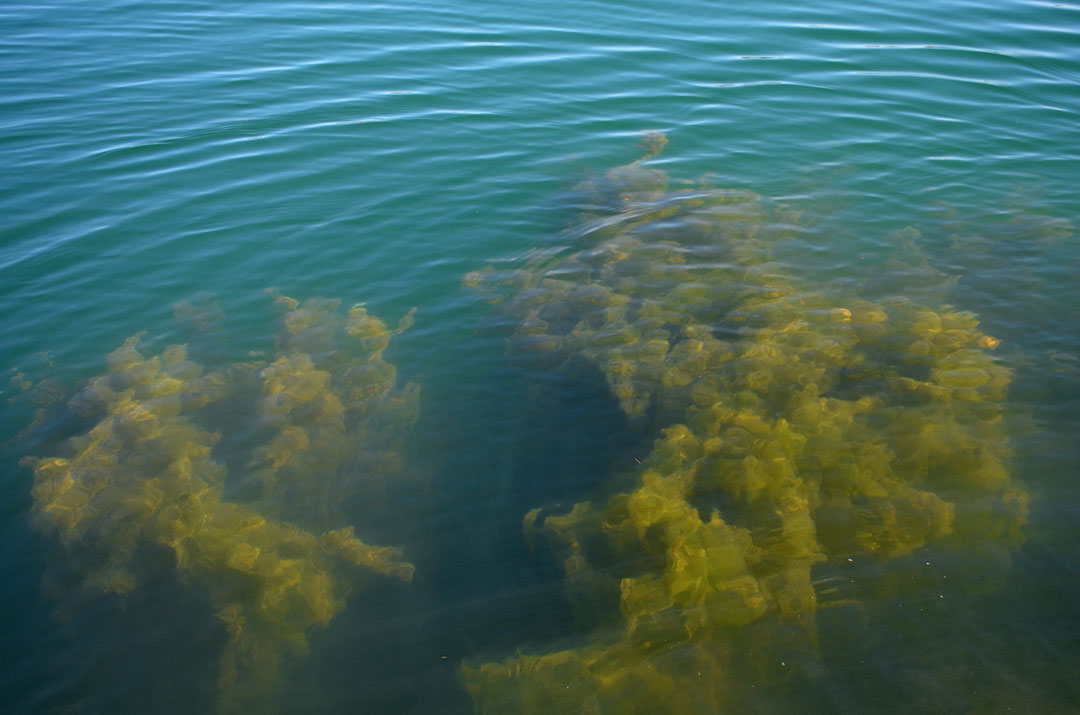 Toxic blue-green algae and the invasive quagga mussel in lakes can be a problem for drinking water supplies from lake water and can lead to higher costs for water treatment and maintenance of the infrastructure. Quagga mussels are up to 40 mm in size and cling fast everywhere.

Until now, precipitation in Switzerland has usually been sufficient to meet the water requirements of most agricultural crops. However, summer precipitation is set to decline as a result of climate change, and as temperatures rise, more moisture will evaporate from the soil, so that plants will need more water. As site-adapted agriculture is the ultimate objective, farms will have to adjust to the changing conditions in the medium term.

Crops that are already irrigated today will need around twice as much water by the end of the century unless effective climate change mitigation measures are implemented. However, during hot, dry periods, many rivers and smaller groundwater bodies already have very little water to spare for irrigation.

Farms will have to adjust to the changing conditions in the medium term. This will mean factoring in other climate-related risks such as heat stress, increased pest pressure, heavy precipitation events and hail. Agricultural cultivation methods, products and sites will need to be completely reappraised. A move to growing drought-resistant species or varieties is unavoidable.

With new irrigation infrastructure currently being planned and built in many crop-growing areas, expanding water-inefficient irrigation systems and intensifying agriculture (more vegetable growing, for example) will not be compatible with the increasing scarcity of water supplies in the future.

Regional resource planning will also be necessary to prevent the overexploitation of water resources. In addition, a transparent presentation of water costs would be useful to avoid creating misplaced economic incentives. 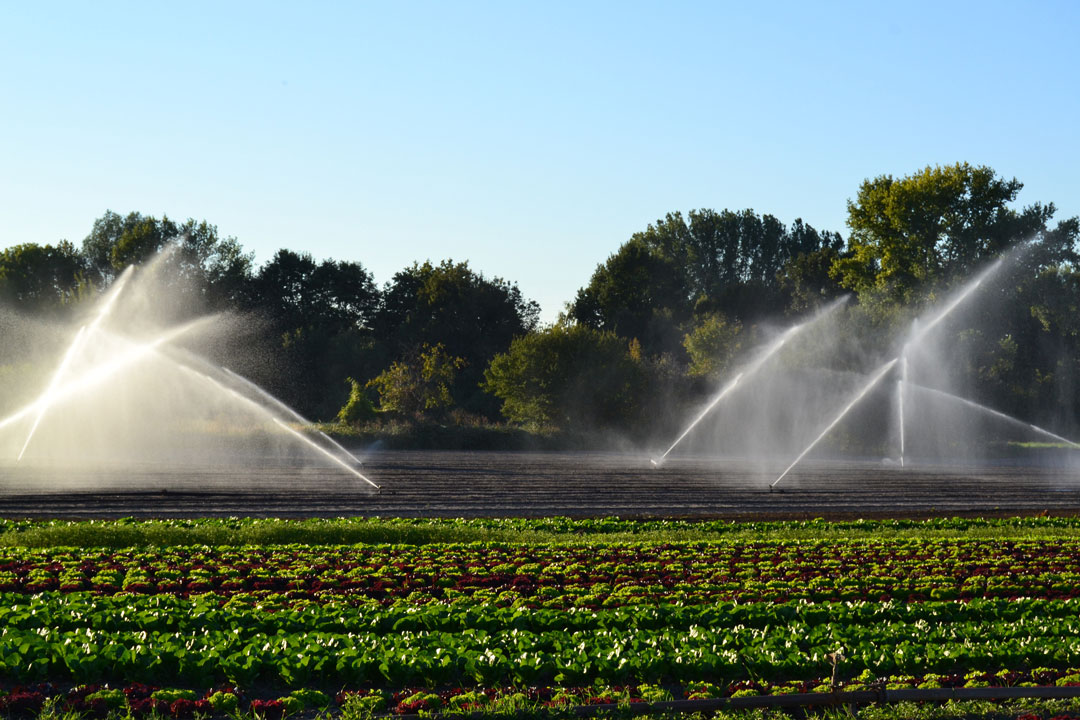 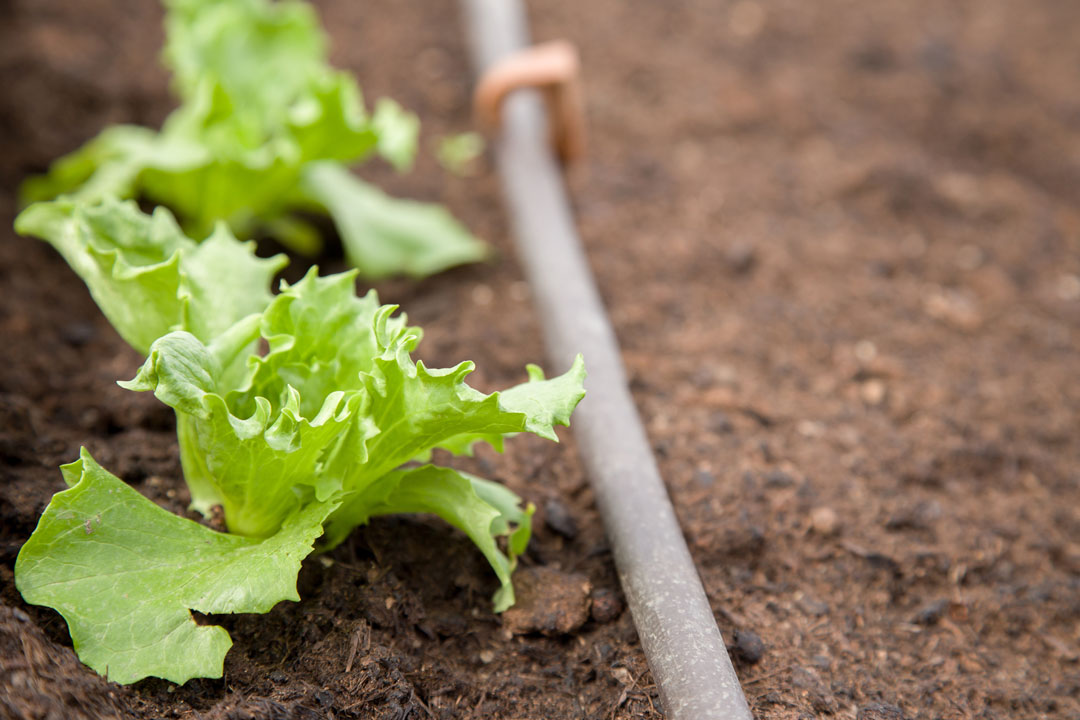 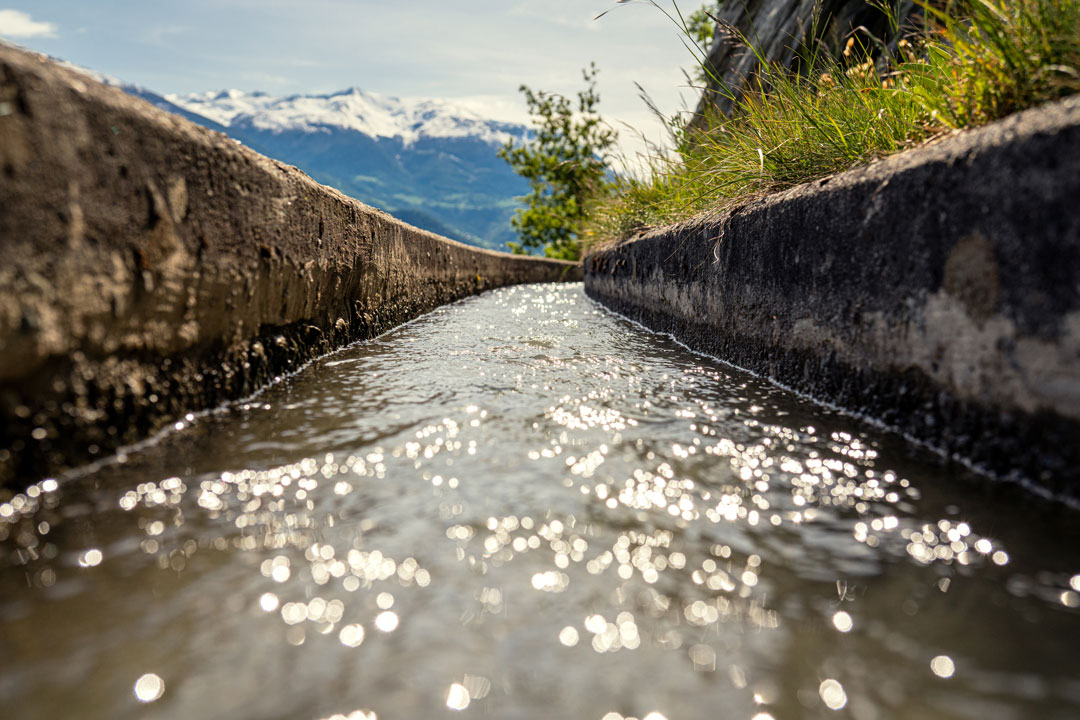 The usable hydropower potential in Switzerland has been largely exploited. Hydropower generates 60% of Switzerland’s electricity and, being a renewable resource, is an important contributor to the energy transition. It supports the decarbonisation of Switzerland’s energy system. However, the use of hydropower also has an ecological impact on waters. The necessary conservation and expansion of hydropower must therefore be carried out in such a way that it has the least possible impact on river ecosystems. Any expansion should focus on optimising existing facilities and be carried out in such a way that the few remaining intact water bodies are preserved.

Hydropower itself will also be affected by climate change. Although the Alpine reservoirs will continue to fill up, meaning that their storage capacity can largely cushion the seasonal changes in inflows, the way they are managed will need to change.

In the case of reservoirs with heavily glaciated catchments, the amount of water available will decrease in the long term as the glaciers disappear. At the same time, the influx of loose material will increase. Countermeasures will therefore be required to prevent the deposits from reducing the storage capacity.

The output of run-of-river power plants is directly linked to the runoff. With summer runoff expected to decline, these plants will be able to generate less electricity during the warm months. In winter, however, when energy demand is high, the rivers will carry more water, meaning that more power can be produced.

Provided measures are taken to mitigate climate change, annual electricity production from hydropower will barely change in the long term, decreasing only slightly if at all. Without climate change mitigation, though, the amount of energy generated could fall by up to 7% by the end of the century.

The figure shows examples of 11 run-of-river power plants in Switzerland, indicating how electricity production will change by the end of the century with current plant configurations and residual flows. It can be seen that the plants will generate more power in winter, but less in summer and over the year as a whole.

Water bodies can absorb energy very effectively in the form of heat and then release it again. That is why, for decades, watercourses have played an important role in cooling large installations. Groundwater is also used intensively for cooling and heating purposes in many regions.

In summer, watercourses are increasingly reaching temperatures that affect the organisms living in the water. Consequently, using cooling water from rivers in a way that heats up the water even more will scarcely be possible in the future. However, it will still be possible to use water from larger lakes thanks to their substantial volume. To avoid negative impacts on ecosystems, abstraction systems and return lines must be designed in such a way that they do not alter the stratification conditions in the lake.

Thermal use of river and lake water in Switzerland

Thermal use of river and lake water in Switzerland 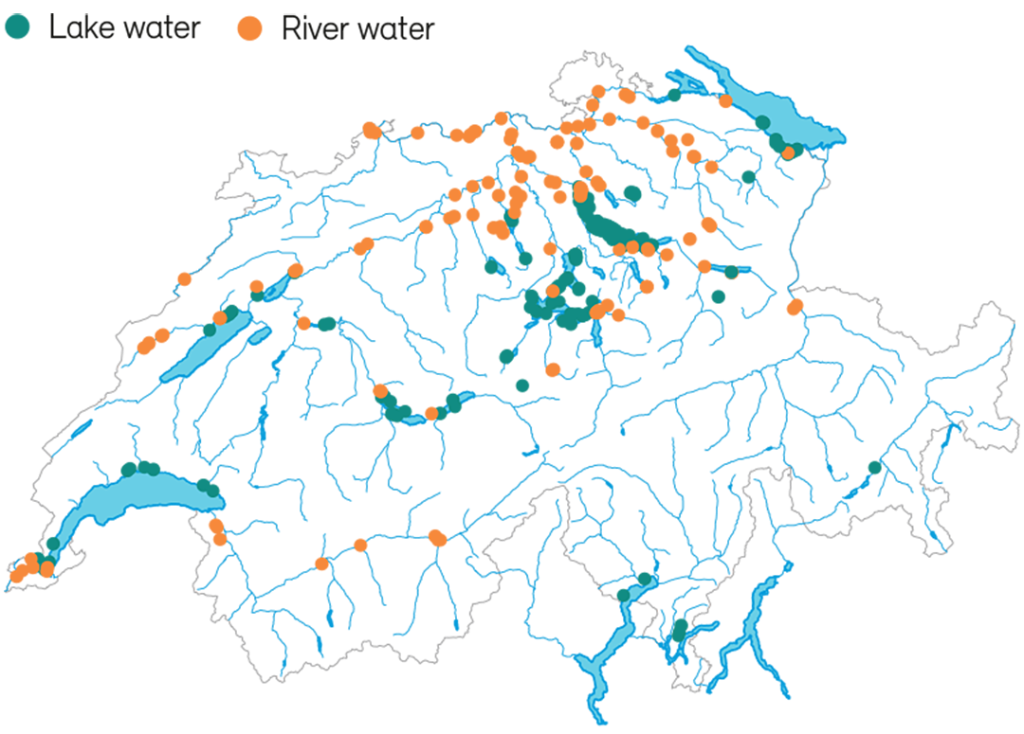 The dots show where river water (orange) and lake water (turquoise) are currently used for heating.

The warming climate is becoming a great challenge for winter tourism. Most resorts use snowmaking machines to make up for the decline in snowfall. However, snowmaking uses a lot of water, which is usually not naturally available at high altitudes in autumn and winter.

Cable car companies are increasingly building storage basins for meltwater and rainwater, which can affect the quality of the landscape. In many places water for snowmaking has to be pumped up from lower elevations, which is extremely energy-intensive. Some lower-lying winter resorts have already closed down because artificial snowmaking is not economically viable or because the temperatures are too warm. Others are sure to follow.

However, climate change will also open up opportunities for tourist regions in the mountains if more people want to escape the heat in urban areas. In addition, the summer season will last for longer as the first snowfall will start later and later in the year. Overall, rivers and lakes are likely to become even more important for recreation and tourism in the future, luring visitors with the chance to cool off during the summer heat.

Water dependence of tourism and recreation in Switzerland

Water dependence of tourism and recreation in Switzerland 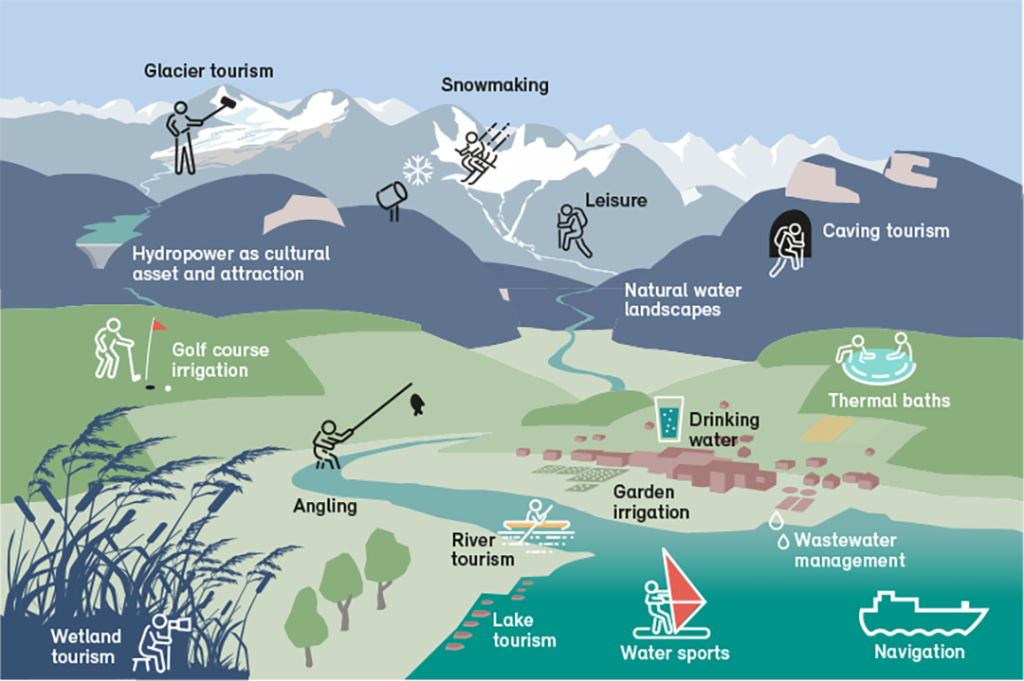 Water is a central resource for the supply of tourism infrastructure and the basis of many winter and summer tourist activities.