The increases in the highest temperatures are even more pronounced than for the average temperatures. Heatwaves and hot days and nights become more frequent and extreme. Heat stress is greatest in low-lying urban areas with high population densities.

Possible range of changes in comparison to 1981 to 2010 without climate change mitigation (simulation range). Typical 30-year averages across Switzerland. Temperature changes are rounded to 0.5 °C.
**See explanation in main text.

On the hottest days in summer, temperatures shoot up 5.5 °C higher than we are accustomed to now. Hot summers such as in the record year of 2003 have become the norm. Very hot days – with temperatures that used to occur only once in a year – are now occurring on average 18 times per year.

Over the coming decades, average temperatures in Switzerland are projected to continue rising. The increases affect all four seasons but are most prominent in summer. If greenhouse gas emissions continue to increase, by the middle of this century, average summer temperatures may be up to 4.5 °C higher than now.

The increases in the highest temperatures are even more pronounced than for the average seasonal temperatures. By 2060, the hottest days in an average summer could be up to 5.5 °C higher than they are today. This is explained in part by the fact that less water will be evaporating and cooling the ground because there will be less moisture in the soil.

The regions of Europe that surround the Mediterranean Sea, including Switzerland, are affected by some of the most severe increases in temperature extremes worldwide. This trend has been apparent even over recent decades and is very likely to continue into the future.

With every additional degree Celsius increase in the average temperature in Switzerland, the number of very hot days approximately doubles. By definition, “Very hot” here refers to the 1% hottest days of all summers between 1981 and 2010. Currently, very hot days occur on average just under once per summer.* By the middle of this century, the number of these very hot days could rise to 18 in a typical summer. At the same time, heatwaves will become a much more common occurrence.

Particularly in low-lying regions, periods of heat stress for humans and animals will also increase. The combination of extreme heat and humidity means that the body is unable to cool down to a comfortable level.

The climate models do not take into account any urban heat-island effects. In heavily developed urban areas, temperatures (and especially temperatures at night) are a few degrees Celsius higher than in surrounding areas. The majority of the population in metropolitan areas is therefore affected to an even greater extent by the warming temperatures. 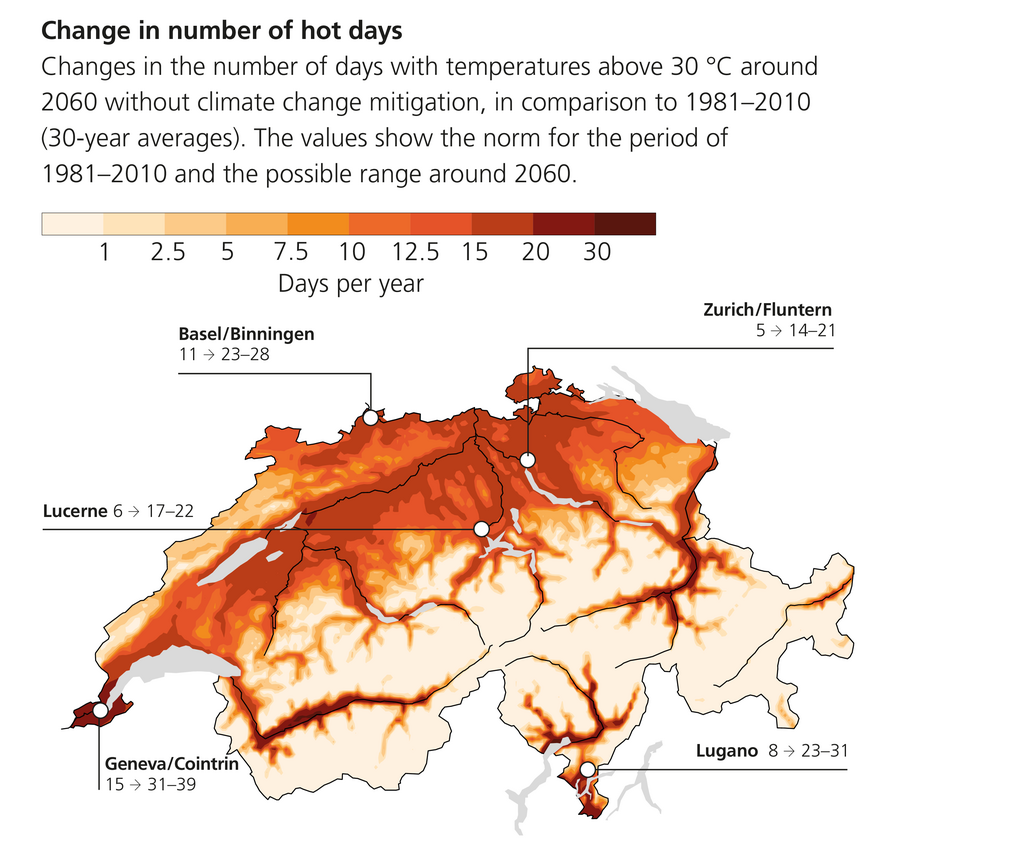 Low-lying urban and residential areas are particularly affected by heat. On the Swiss Plateau and in the Alpine valleys, the thermometer is reading over the 30-degree mark more frequently – the temperature which denotes a “hot day”. The greatest increases in
hot days are expected in the regions of Geneva, Valais and southern Switzerland.

Ticino’s climate is affected by the air currents from the Mediterranean and is generally a few degrees warmer than other regions of the country at similar altitudes. By the middle of this century, Lugano can expect about 30 days of heat stress every summer. 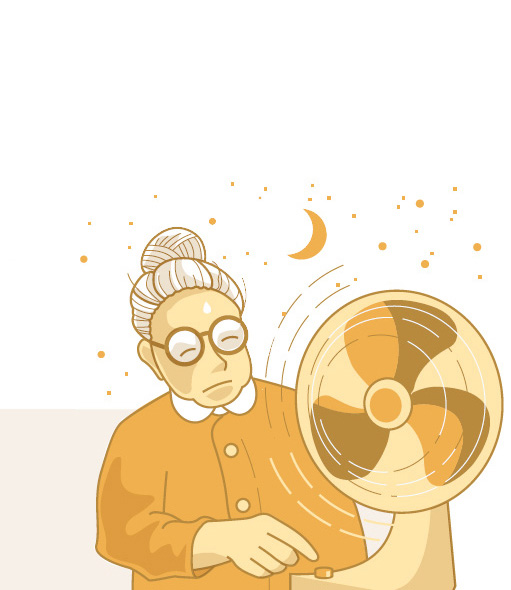 « Cities are particularly vulnerable to heat. The city of Zurich is taking steps to prepare for climate change by developing a ‘City Climate Master Plan’. It is important to have the best possible information at hand about increases in heat stress in order to be able to design appropriate adaptation measures. »