Climate-smart forests of the future

How should the forests of the future look like and what can science contribute?

Different tree species are differently sensitive to heat and drought that are expected to increasingly threaten forests in future. Some trees like oaks root deeper and can thus access water from deeper down in the soil, whereas shallow-rooted species like spruce can only take up water from the topsoil that dries out quickly during a drought event. There is some evidence that forests with higher tree diversity (i.e. harbouring different tree species) can be more drought resistant than monocultures. For example, species with different rooting depths might avoid competition for water and exploit the soil moisture more efficiently compared to monocultures where all trees take up water from one soil depth. This effect in mixtures is called niche complementarity. Moreover, deep-rooting trees might lift water to shallower soil layers, where then shallow-rooted species benefit, a process called facilitation. 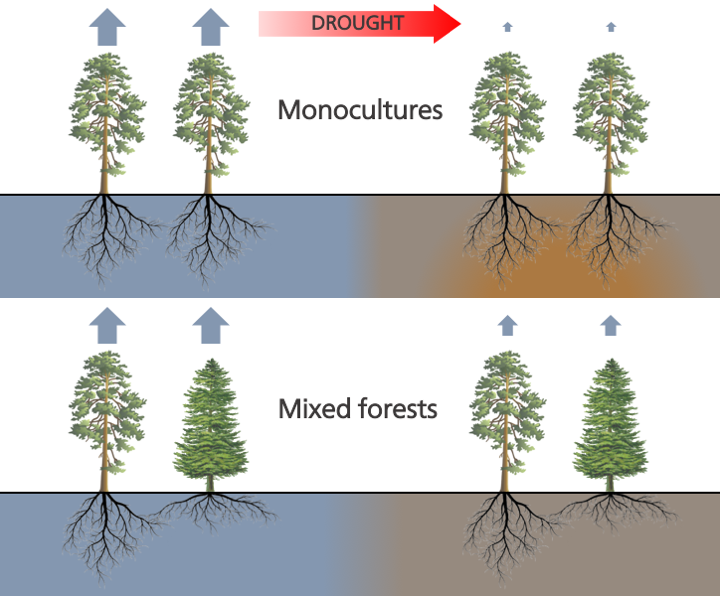 In monocultures, all trees root in the same soil depths and thus compete for the same water resources. During a drought, when water availability is more restricted, competition increases, the water resource gets depleted and the trees have less water to transpire. In a species mixture, different rooting depths avoid competition, the water resources used are complementary and more water remains available even under drought.

Even though biodiversity effects are well known there is still a lot of work for scientists to do. Not all species benefit from growing together and sometimes mixed forest are less drought resistant than monocultures. Finding the right species with traits that fit together is one of her research topics. Moreover, specific site conditions (e.g., related to the soil and the microclimate) need to be considered, as sometimes a species combination works well at one site but not at another. Scientists need to research if non-native species that are more drought tolerant would be an option for Swiss forests in future. It is, however, unclear if such tree species would negatively affect the functioning of ecosystems (e.g., by not supplying habitats for insects and birds) or if they might be invasive (i.e. spread more or less uncontrolled). To understand potential negative impacts of non-native species but also their benefits is also a line of needed research.

There is still a lot of work to be done to understand how a climate-smart forest that will be able to sustain itself in the uncertain climate of the future should look like.  But there are ways to improve forests’ drought resistance by choosing the right species and the right mixtures – science informed forest management is a promising way to maintain forest ecosystem services in future.

Noemi is a forest ecologist and a specialist on climate change effects on trees and forests. Climate change impacts different tree species differently and often (but not always) mixed forest with higher tree diversity are more resistant to drought. There are still many unanswered research questions that Noemi and her team follow. Amongst them are: What is the best species mixture for the climate of the future? How can trees help each other to grow and survive in drier and hotter climate? Is it a good idea to now plant species not native to Switzerland?