Tree mortality is increasing in Switzerland due to climate change.

As a result of increasing temperatures and a higher frequency of drought events already presently tree mortality is increasing globally. In Switzerland, Scots pine (Pinus sylvestris) forests in lower altitudes in the Valais have been most affected since the 1990s, and the 2018 drought caused additional intensive dieback. In 2018 foresters in the cantons Solothurn, Jura, Basel and Schaffhausen also reported intensive premature leaf browning and dieback of beech. Moreover, many other species such as spruce and fir have been negatively affected and in many parts of Switzerland these species are prone to intensive mortality now. With the projected increase in temperature and frequency of drought events in future, tree mortality will become the rule rather than the exception. 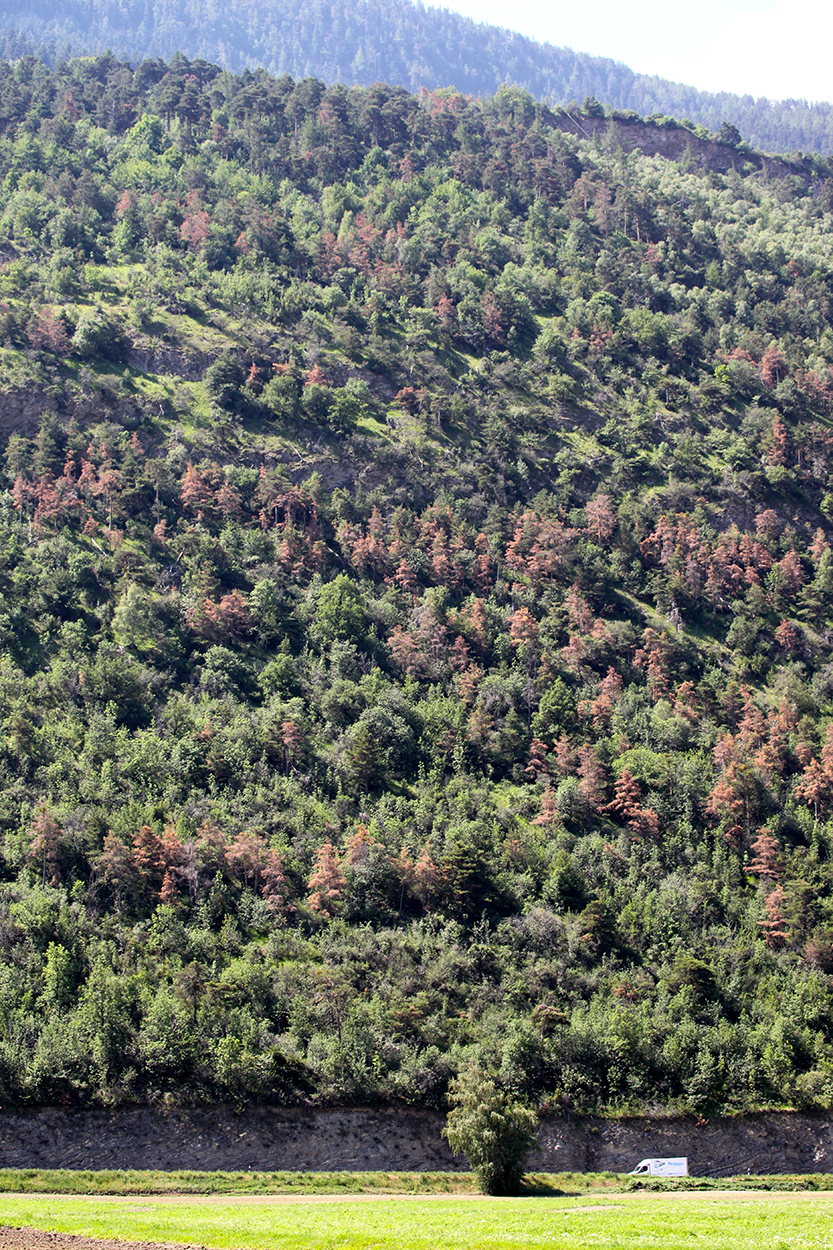 Dead Scots pines in the Valais near Visp

High temperatures and periods of drought, together with insect and mistletoe infestations, lead to the death of trees, as here in a stand of Scots pines in the Valais near Visp. 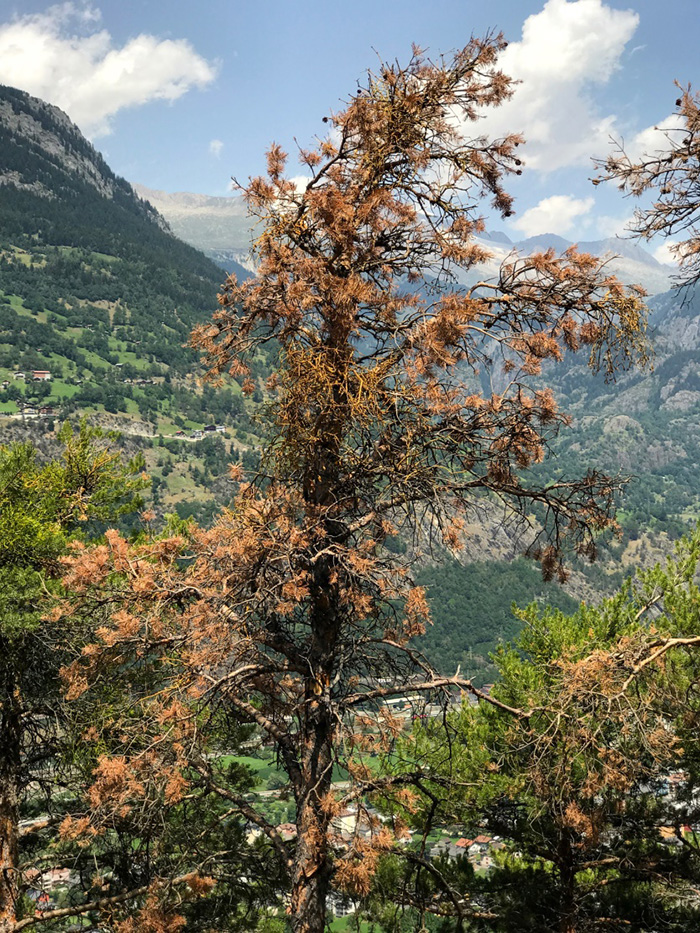 Dead Scots pine in the Valais near Brig

Drought and heat disrupt water transport in plants and reduce the amount of sugars available for metabolic processes.

Increasing tree mortality is most likely caused by the changing climate. Direct effects of a changing climate are mainly related to restrictions of the water availability during drought periods, which are expected to occur more often in the future. On the one hand, reduced availability of water causes air embolisms in the water conducting vessels of trees leading to hydraulic failure. On the other hand, trees close the small pores (stomata) in their leaves to avoid water loss. This, however, also reduces the amount of CO2 that can be assimilated by leaves and over the long-term leads to carbohydrate starvation. In addition, trees that are stressed by heat and drought become more susceptible to pests and diseases, which in addition contribute to mortality.

The dying pine forests in the Valais cannot fulfil their protection services in a proper way. Dead and fallen trees don’t stabilize the soil and cannot protect against rockfall and against avalanches in winter. It is likely that settlements, roads and other infrastructure will not be safe anymore if mortality continues to increase. This is not only a problem of the Valais but might affect large parts of the mountains in Switzerland. Foresters will eventually have to consider planting tree species which are more drought resistant on the slopes where Scots pine is not able to survive. 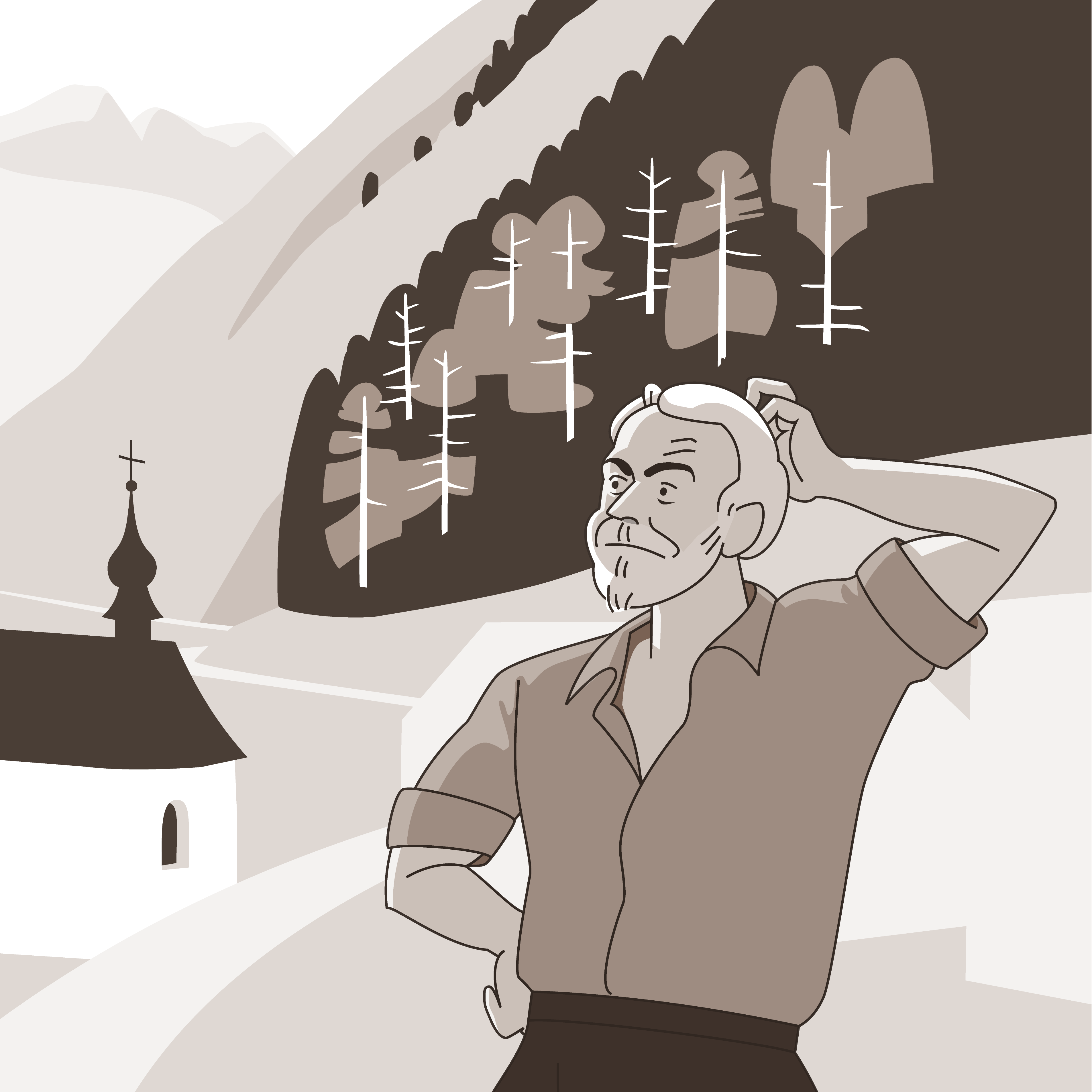 Jean is a forester in the Valais, and he is nervous about the state of his forests. Pine trees growing on the slopes, which are important for fulfilling important ecosystem services including the protection of soils but also of human settlements and infrastructure are dying after years with intensive droughts.